We are pleased to announce a new GPU backend for TVM stack - ROCm backend for AMD GPUs. If you are not familiar with TVM, you can refer to the earlier announcement first. In short, TVM stack is an end to end compilation stack to deploy deep learning workloads to all hardware backends. Today’s announcement focuses on the code generator support for AMD GPUs. Specifically, we developed a new GPU code generator for AMD GPUs. It compiles a high level computation description written in TVM frontend down to an optimized native GPU code. It achieves this using existing LLVM code generator in TVM and LLVM’s AMDGPU backend. We have also built a ROCm runtime for TVM to support native deployment of compiled ROCm modules. Thanks to the NNVM compiler support of TVM stack, we can now directly compile descriptions from deep learning frameworks and compile them to bare metal code that runs on AMD GPUs.

TVM stack is developed by an open source community under Apache-2.0 License. ROCm backend support is done with the help from community. Aditya first implemented codegen and runtime. He was later joined by Masahiro. Masahiro’s full time job is not related to TVM or AMD GPUs. Nonetheless, TVM got him excited and he has been involved in fixing bugs, resolving all failing unittests, and adding math function support to codegen.

Radeon Open Compute is open-source initiative by AMD to leverage compute power of current and future generation GPUs. ROCm software stack is a great tool to express and run most commonly used GPU programming models and achieve peak performance. Not only ROCm is an open-source stack, it is an open stack, which means all the ISA and hardware features are well documented and programmable by developers. Developers can experiment with different programming models and try out multiple ways to achieve peak throughput and bandwidth for their algorithm.

On ROCm stack, there is no virtual ISA, you get what you ask for not less not more. Hence, one can schedule operations in a kernel at a granularity of a single instruction, without worrying about instruction reordering and other optimizations you do not ask for.

Thanks to TVM stack, we can directly compile models from popular deep learning frameworks such as MXNet and PyTorch into AMD GPU assembly using NNVM compiler, today. With ROCm backend, the generic workflow becomes as follows.

We have put together working examples of compiling models from MXNet and PyTorch with NNVM, and running them on AMD GPUs with ROCm backend. More frameworks are supported via the NNVM compiler stack. The repository is available here.

The script mxnet_imagenet_inference.py demonstrates Imagenet inference on AMD GPUs with recently introduced MXNet-Gluon model. It does the following:

The example comes with an image of the following cat. 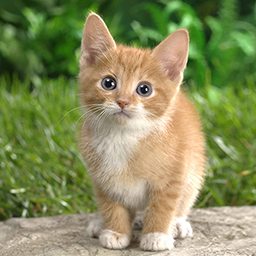 Running our network, it predicts this image as “tigar cat”, among 1000 categories.

The script advanced_superres_onnx.py gives an example of loading a model trained with PyTorch. The model is stored in the ONNX format. In this example, our network takes an low resolution image as input, and outputs a 4x high resolution image. We refer the details of a problem setup and the network architecture to the original paper. The network has 37 convolutional layers, and thus it is far more complex than the simple 4 layer network in NNVM’s tutorial. Using the ONNX export interface in the latest Pytorch package, we exported a trained model available here to the ONNX format for use in this example. We thank the author of the repository for making his code and trained models publicly available.

In order to use models in the ONNX format with NNVM, we first use the ONNX library to load the ONNX model into the Protocol buffer object. We can then use nnvm.frontend.from_onnx(...) to obtain an equivalent NNVM graph. With a NNVM graph in hand, we can follow the generic workflow of compilation and graph execution outlined above.

The input images are taken from the original paper, and they are available here.

A Note on performance

The current support on ROCm focuses on the functionality coverage. We have already seen promising performance results by simply adopting existing TVM schedules for CUDA backend. For example, you can try running the gemm test script in the TVM repository and see the result. For two types of cards we tested, the current gemm recipe for square matrix multiplication (not yet specifically optimized for AMD GPUs) already achieves 60% to 65% of peak performance. This is already a promising start, as it is very hard to optimize performance to get to peak and we did not yet apply AMD GPU specific optimizations. We are starting to look at performance optimization and we expect more improvement to come.

In the following part of this article we focus on explaining how to use ROCm backend when working with TVM directly. All you need to do is to build your TVM function under the target “rocm” and create a runtime context for it. Here, we show an example of ROCm backend usage, following ‘Vector Add Example’ in TVM’s getting started tutorial.

We start by setting up a compute operation and a schedule for the vector add kernel. This step is independent of a backend.

Next, to use ROCm backend we build our kernel under “rocm” target. This will cause TVM to use our new code generator. We also need a runtime context for ROCm backend.

After building the kernel and setting up a runtime context, we can launch our vector add kernel.

We can view LLVM IR that TVM generates in the following way:

We can also view GPU assembly that ROCm backend generates. This is the real code that runs on your GPU.

The assembly should look something like this, omitting unnecessary details: